To some people, dare I say most, the idea of dating has always been awkward. Whether we’re asking someone whom we just met to join us for a meal or going out with a total stranger on a blind date, sitting there in constant judgment of each other can be unnerving to say the least and downright painful if we’re going to be blunt. Lucky for us, we live in the age of the internet where many seemingly difficult aspects of life are made easier, quicker and hassle free in the digital domain, including meeting people and dating. 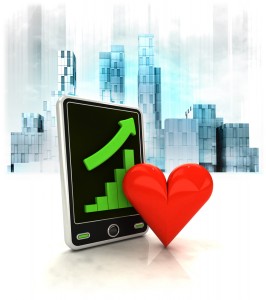 Although, it wasn’t too long ago that people found online dating an intimidating prospect, the theory being anyone you met on the internet would undoubtedly turn out to be psychotic . That time has come and gone, and today people from every demographic have gotten comfortable with the idea of online dating. It’s almost to the point that the online dating pool at least mirrors the off-line dating pool, but it’s quite possible that the online pool dwarfs it.

Still, not everyone is dating online, so there is still a lot of market share to grab for all these competing dating services. But one online dating site, or should I say app, in particular seems to be getting a lot of attention, and that app would be Inter Active Corp’s (IAC) Tinder.  Tinder is like a game where you can interact with pictures and browse other people’s interests with the swipe of a finger, in fact according to a survey conducted by Session M, 30% of Tinder user’s like it for that reason. It works at the break-neck pace of the modern attention-span and the swiping action can be kind of addicting.

According to Tinder, 90% of their user base was between 18 and 24 in the beginning, but today that number is closer to 51%. Twenty-five to thirty-two year olds make-up 32% of users, thirty-five to forty-four year olds are about 6.5%, and interestingly albeit kind of scary, 7% of the user base is made up of thirteen to seventeen year old kids. That’s .5% more than adults over 44. While older folks are more likely today to trust online dating apps than in the past, the fact is that younger folks are more likely to trust the technology and are also the largest market.

In my opinion, Tinder is becoming the preeminent dating site recognized by the younger demographic and could end up providing an amazing value to investors. With that market in place, and their addicting swipe feature (that brings up the next possible suitor), the monetization opportunities through marketing and ads are astounding. Barclays is predicting that Tinder’s valuation could reach $1.1 billion by the end of next year.

Online dating apps provide a unique and very valuable service. These apps basically help people out of an awkward situation by creating a pre-text for people to meet that can be fun. They allow people to get to know each other before they get know each other, which is a good thing. Tinder just so happens to be the one that is the most fun, mobile and therefore valuable.