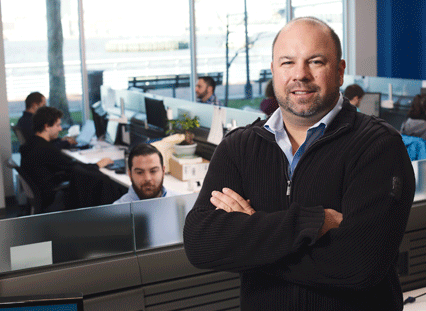 As he sits in a conference room that overlooks the Delaware River and the Philadelphia skyline, WebiMax founder and CEO Ken Wisnefski is also enjoying his view of Camden.

A Newark native, Wisnefski says he’s proud of the fact his company was the first to commit to Camden under the landmark Economic Opportunity Act of 2013’s revised Grow New Jersey incentive program.

And on the two-year anniversary of being one of the first companies to gain state approval for a project under the new law, Wisnefski said he’s never been more confident in his belief that Camden is the right place for his business to grow.

“This will always be our headquarters. I think that that’s just kind of the basis of it. We’ve really been pleased with it.”

For the state, WebiMax’s move to Camden is a sign that the revised incentive programs, which took years to plan and finally sign into law, are actually working and may help to reverse the long-held notion that New Jersey-based businesses are lining up to flee the high-cost state.

It’s also a milestone for the state Economic Development Authority, which administers the programs: WebiMax was the first company to actually collect its tax credit under the revised Grow New Jersey program after meeting its commitments for new and retained jobs this year. The firm recently was issued a $603,500 credit, the first of 10 annual credits under its $6.035 million award.