Celebrities with a large number of Instagram followers have taken a substantial hit this week devaluing their accounts as Instagram announced that they have “completed a fix to remove spammy accounts.”     Stars like Kim Kardashian and Katy Perry both saw their followers fall by over a million each.

There’s a huge advertising opportunity that lies at the intersection of celebrity and social media.  Mega stars on social media boast audiences of millions of people, with a quantifiable percentage of interaction/ engagement, and brands will cozy up to these celebs paying big bucks to get them to broadcast a message that will help to either sell a product or generate some brand recognition.

Networks and studios spend billions per year pooling together talent, developing and creating content and then marketing it all, but they still can’t garner the kind of followage of the stars they create.  For example Kim Kardashian has 26.7 Million followers as of writing this, but the network that made her a household name, E!, only has 7.07 million.  It’s a bit like a genie that grants a person’s wish to be all powerful.

But a lot of those friends/fans/followers are in fact fake profiles created to give the outward appearance of being more popular among social media users.  There’s also the issue that many stars attract fake spam accounts that are created to piggyback on their fame.  This is nothing new, and social media networks have done their best over the years to stem the tide against fake accounts, although it appears nothing as effective or sudden as the recent move by Instagram. 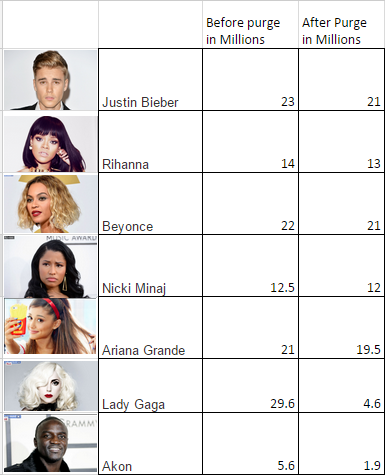 The fact is that a high number of followers, either fake or real, does have the effect of attracting a percentage of real followers, so buying fake followers wasn’t or still isn’t necessarily a bad investment, when you consider the amount of money stars get paid to broadcast a message from other brands.

Someone who works for me told me about an experiment he did for his last job, where he paid $250 for the promise of 10,000 real targeted followers.  Over the course of a few months he saw his followers increase by about 12,000.  But were they real?  He put all his new twitter followers onto an excel spread sheet, assigned a random number next to each one.  After sorting the spread sheet numerically by that row, he took the top 100 and analyzed how often they tweeted, how many followers they had, and who else they followed to determine if they were real and targeted.  What he determined was that exactly half of his new followers were real and exactly half of those followers were targeted correctly.  Though it wasn’t exactly what he paid for, he was impressed by the breakdown.    Was it worth it?  He said in the end that it wasn’t for him.

But at the price of $250 for 10,000 (which is actually pretty expensive in the fake friend market) one million fake friends is like $25,000. Depending on their star power, celebrities can make big money over time from brands looking to broadcast on their accounts.

What do celebrities get paid to advertise for brands on social media?

According to a report from the Huffington post from 2013, Frankie Muniz got $252 per tweet at the low end with only 175,323 followers (he has 214k followers today).   And at the high end there’s Jared Leto (1M followers) and Khloe Kardashian (8M Followers) fetching $13,000 per tweet.  The more famous Kardashian apparently gets a maddening $20,000 per tweet.

Should brands stop paying so much if a celeb’s number deflates though?  Absolutely!    Celebrity in and of itself is a brand, and what stars are experiencing with this ‘culling of the herd’ by Instagram, is a lot like what brands and companies experience on a regular basis from the likes of Google, and it’s the reason SEO or Search Engine Optimization has dominated digital marketing for over a decade.   This is just the cost of doing business.

In defense of Instagram, while this purge of fake friends definitely hurts celebs, there’s a lot of stiff competition among social media networks – and their only real value is in the number of actual people using them.   These networks have to adapt to the way people use them or else some other network will surely come along and blow them away.

Celebs shouldn’t be mad, what is happening through competition and new technologies is just a process of democratization whereby networks and search engines are giving the public more of what they want – actual valuable content.   Should stars stop buying fake friends?  – Stars themselves can only wait and see how often social networks do a purge like this in order to make that call.